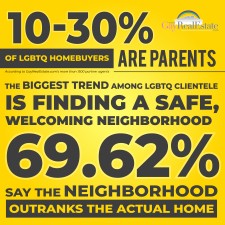 PALM SPRINGS, Calif., October 15, 2019 (Newswire.com) - GayRealEstate.com, a service that connects buyers and sellers with compatible agents, reports that as adoption among same-sex couples has increased exponentially, so has the demand for safe, adequate housing options among LGBTQ parents.

Between 10 to 30 percent of LGBTQ homebuyers are parents, according to a recent survey of GayRealEstate.com’s more than 1500 partner agents. While many are biological children, according to U.S. Census Bureau statistics, the growing number also coincides with the steadily expanding adoption rate among same-sex couples.

Among those under age 50 who are living alone or with a spouse or partner, nearly half of LGBTQ women, at 48 percent, are raising a child under age 18 along with a fifth of LGBTQ men, at 20 percent, according to a report released by the Williams Institute. Same-sex couples raising children are four times more likely than their different-sex counterparts to be raising an adopted child, according to the report. States with the highest proportions of same-sex couples raising biological, adopted or step-children include Mississippi, Wyoming, Alaska, Idaho and Montana.

An estimated two million LGBTQ people are interested in adopting and same-sex parents are raising about four percent of all adopted children in the United States, according to the Movement Advancement Project (MAP).

According to GayRealEstate.com’s survey of their more than 1500 partner agents, the biggest trend among LGBTQ clientele is the priority of finding safe, welcoming neighborhoods. Among those surveyed, about 69.62 percent stated that the neighborhood is even more important than the actual house among LGBTQ home buyers and sellers. The GayRealEstate.com team is committed to the goal of finding safe family housing for LGBTQ parents and expects the demand to grow as adoption rates increase.

The GayRealEstate.com team works to identify the best LGBTQ-friendly cities and communities in each state and region of the country and cultivates relationships and deep networks in each, to provide their clients the support they need to find ideal residency. The service GayRealEstate.com provides is one of many that LGBTQ individuals can use to bypass the potential for anxiety, discrimination and inequitable treatment.

With more than 25 years of experience as the industry leader, GayRealEstate.com continually strives for the protection of all people, regardless of sexual orientation or gender identification, and will continue to advocate for the full and equal treatment of all individuals: in real estate markets and all areas of life.

The GayRealEstate.com team hopes that these statistics will encourage communities to rally around their LGBTQ neighbors and proliferate safe, welcoming places for people to live, regardless of sexual orientation or gender identification.