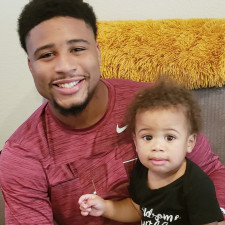 FAYETTEVILLE, Ark., July 27, 2021 (Newswire.com) - Legacy Letter Challenge founder Blake Brewer is excited to announce a formal partnership with Arkansas tight end Koilan Jackson. Together, they'll share the mission of the Legacy Letter Challenge and its goal of helping a million fathers write at least one well-written, meaningful, lasting letter to their children.

A proud father of a two-year-old son, Koilan understands the demands and pressures of being a student-athlete and parent.

"The best time each week is when I pick up my son from daycare," Koilan said. "I love it when he sees me and yells 'Daddy! Daddy!' I want to be a great dad to my son in the same way that my dad was to me. I love my family."

Koilan's father, Keith Jackson, is a College Football Hall of Fame tight end and played for the Philadelphia Eagles, Miami Dolphins, and Green Bay Packers in the NFL. Keith currently mentors a group of 20 young dads who grew up without fathers.

"I've always been so proud of Koilan," said Keith. "I tell him all of the time how much I love him and the great things that I see him doing with his life. Koilan is a great father and I love to see him interacting with Kairo."

The Legacy Letter Challenge helps dads communicate their heart and feelings to their kids in a lasting way.

Blake founded the Legacy Letter Challenge after receiving a life-changing letter from his own father. He discovered the note just hours after his father, Larry, died in a drowning accident in Hawaii.

"Knowing the influence my dad and his letter had on my life, I knew I needed to help other dads write their letters," Blake said. "That's why we started the Legacy Letter Challenge. It's amazing to see how it caught on. We've helped professional athletes, executives, young dads, old dads, and grandfathers write their Legacy Letters."

Koilan begins his Legacy Letter Challenge in the coming months, and he encourages all dads to do the same.

"I hope I can inspire dads from all over the country to be great dads and to write a Legacy Letter with me," Koilan said.

Anyone interested can go to LegacyLetterChallenge.com to sign up for the program. Receive 10% off with the discount code "koilan."

The Legacy Letter Challenge for Moms will be released in the coming weeks.

Blake Brewer founded the Legacy Letter Challenge, to help a million dads write at least one meaningful, lasting Legacy Letter to their children. The program walks dads through a break-through experience: drawing out the letter that already exists in their hearts, carrying it to their minds, and, ultimately, guiding them to put it on paper.